Hot red wine wafts through the air. Friends and families laughing and sharing stories line the cobblestone streets, glasses in hand. The sound of children playing and running through crowds echoes as loudly as the constant sound of Christmas music. Vendors standing behind counters of temporary shops are hocking their goods – handmade chocolates, ornaments, and various Christmas decorations seem to be the most popular. This feels like the county fair but Christmas trees, bright lights, and huge windmills serving as a decoration stretch throughout this pop-up market. 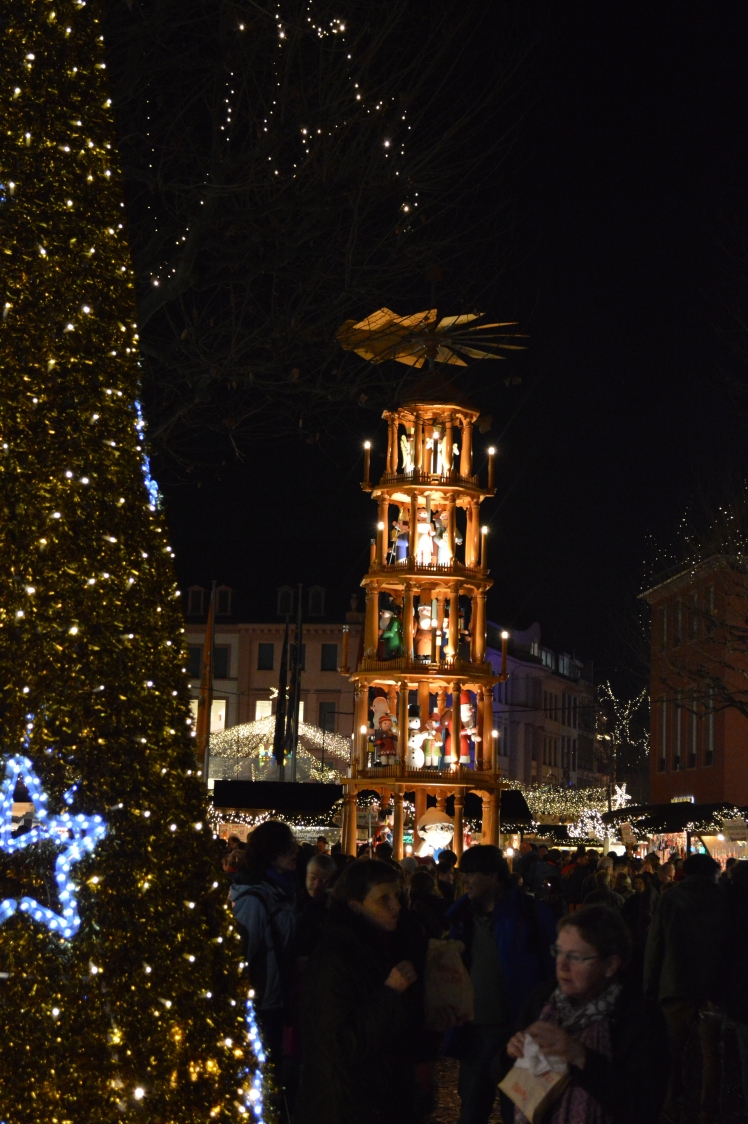 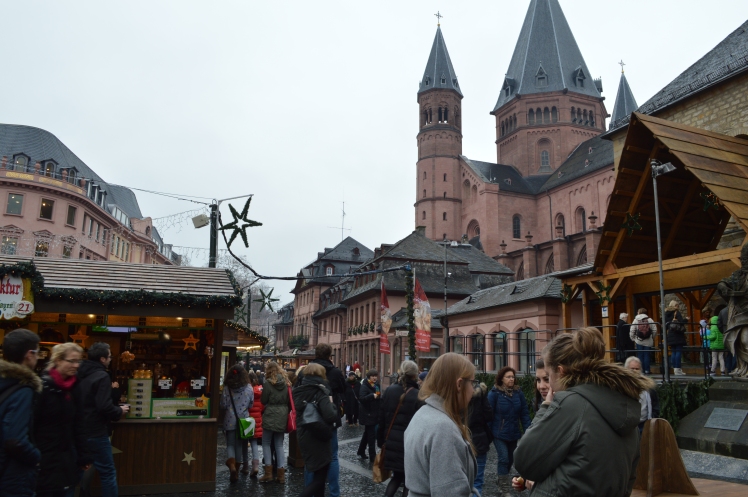 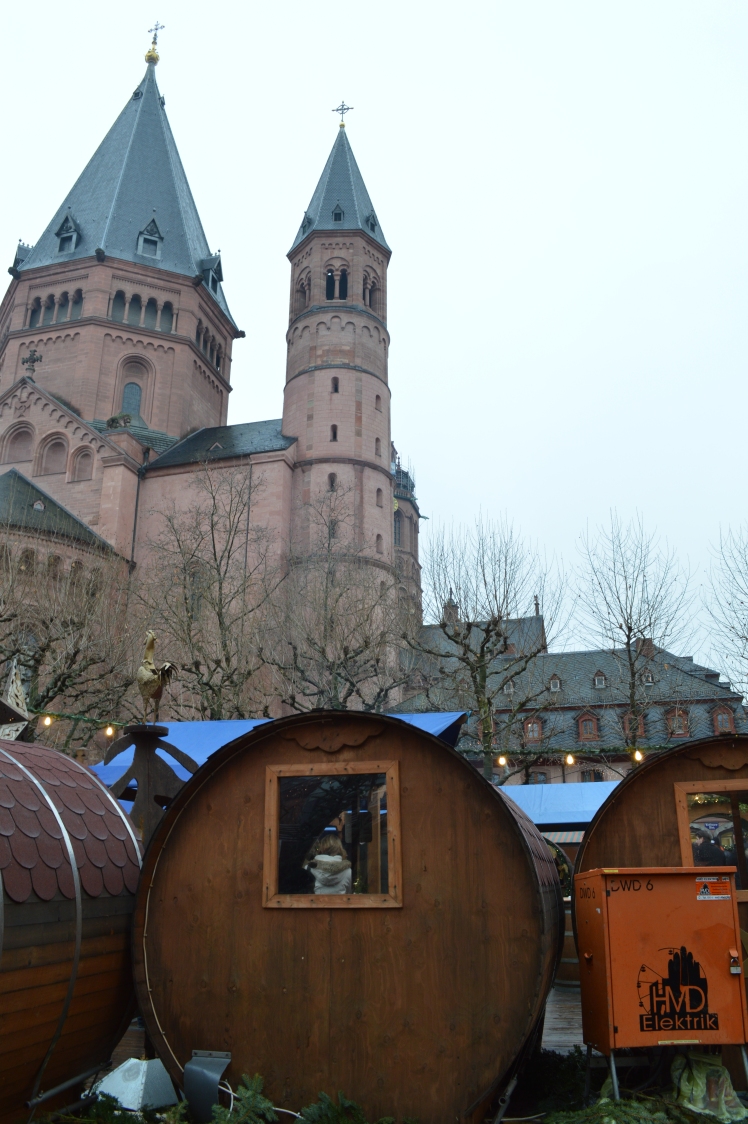 Like a hunting hawk, we are attracted to anything that shimmers which in this case happens to be every other vendor’s booth. We did some real damage shopping for our loved ones. Most vendors did their best to understand our english and we in turn did our best to thank them profusely for their help (danke!). Next to nearly every booth selling merchandise is a food vendor of some sort – potato pancakes, bratwursts, burgers, freshly roasted nuts, donuts, sweet breads and cotton candy to boot. With some hot wine in our systems we bounced from one food vendor to another until we couldn’t possibly have another bite. Pig was by far the favorite meat and we enjoyed immensely. 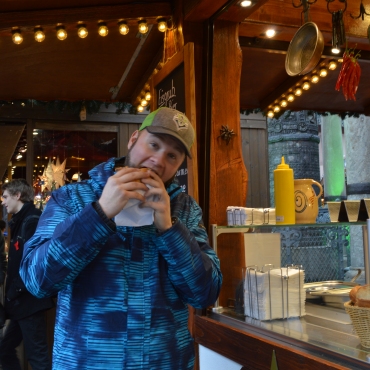 One of the rituals in which we have taken great joy on this trip has been finding little gifts for family. As much as we enjoy shopping for our loved ones, it’s also an exercise in comfort; seeing the goods we’ve come across through family’s eyes brings us closer in spirit. The holiday season has certainly brought the homesickness out a few times. Without their realizing it, the people we love are always with us as we bounce from one destination to the next and stand in awe of everything we come across.

We stayed in the Rhine Valley for three nights in total. Mainz, Germany was home this go around. The town was teaming with Christmas activities and charm aplenty. Aside from the Christmas market we enjoyed (twice in three days) a couple hours in the Guttenberg museum proved to be…interesting…as well. The inventor of the printing press hailed from Mainz and the town has created a rather large museum in his honor. We strained to read the mostly German plaques throughout the museum but did enjoy the priceless collection of the oldest books in the world, including the first bible printed by the Guttenberg press. A 15 minute demonstration of the inventor’s press in action proved most engaging and perplexing all at once; pretending to understand what was being said throughout the demo was difficult to say the least and I caught one lady in the audience snickering at the dumbfounded look on our faces. We are in Germany, so it shouldn’t have come as a surprise that the demonstration would be in German. We had a good laugh at ourselves and enjoyed the demonstration – what we thought we understood anyhow.

Tarin had once been in this area some years ago after college (go Cougs!) and was over the moon that we were returning to explore. I can recall the excitement in her voice many a time as she told me about the Upper, Middle Rhine Valley. After some research on our train ride leaving Berlin, we determined a one day tour up the Unesco World Heritage Site of Lovers Gorge was in order. Taking a mid morning train leaving Mainz, we headed north along the Rhine River, our train following every bend in the river. We rounded a corner in Bingen. before the river, steeply-slopped vineyards and castle dotted mountains filled our train windows.

For our first stop, we visited Bacharach. Cobblestone streets and Bavarian architecture are tucked into the base of a mountain range set along the western bank of the river. Most shops were closed as this is the off-season for tourism but we found one gentleman plugging away at his craft. His shop was filled with hundreds of handmade pieces which we marveled: 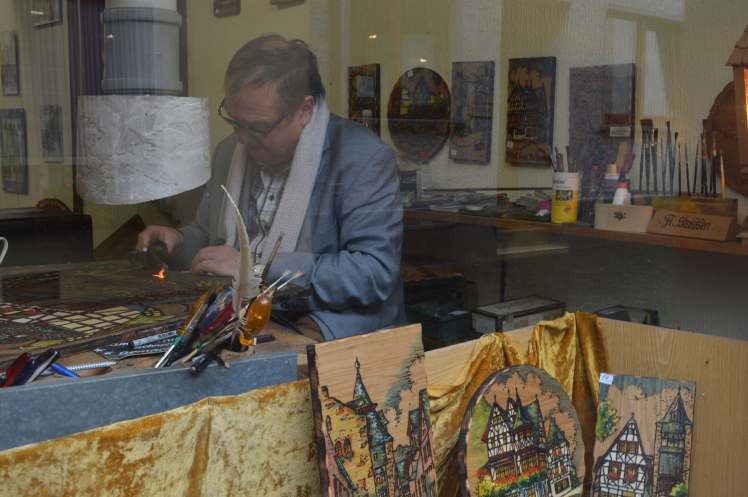 Looking up the mountainside, Tarin spotted the ruins to an old church. We climbed a steep stairway to reach the base of the centuries-old ruins floating above the river and town below. 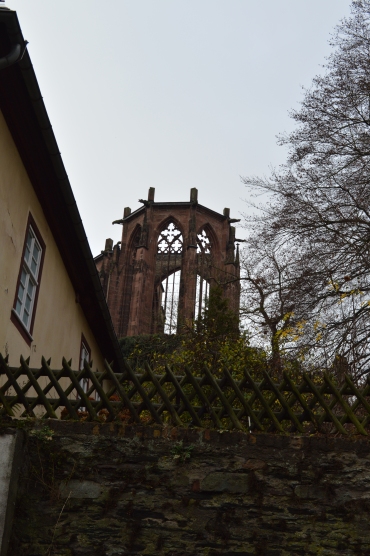 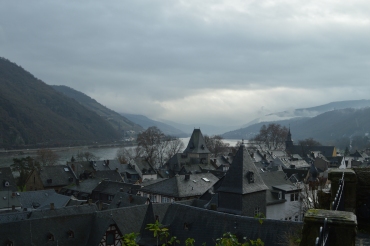 Trains came every hour along this route and we hopped on board a north-bound locomotive in order to reach Koblenz, the most northerly city on the Rhine Gorge. Always proving most effective, we wandered the streets in the hope that we would find a late lunch. Voila, a few blocks away from the train station, Aubergine appeared! We sat next to a window for proper people watching and opted for a light meal of soups and salads. Their pumpkin soup was creamy with a hint of spice from freshly ground ginger added in and topped with toasted pumpkin seeds – absolutely delicious. Paired with a large salad, the meal provided fuel for our quick jaunt across town to view the confluence of the Rhine and La Moselle rivers.

We only snapped a couple of pictures as we had to hoof it for the train station which was about 2 miles away. We barely made the train headed south before it left. The ride home proved just as picturesque as the sun was setting on the Rhine Valley and our time in Mainz.

One thought on “A Very German Christmas”