Densely forested mountains give way to vast valleys, sparsely populated but heavily farmed. The sun has set but we are sure never to lose our way. Simply find the guiding light, the red-hued clouds painted by the crater deep within Mombacho. Hell, even if you do get lost you’re likely to find a local drunkard who would be happy to show you to your destination – just try to have a little fun with the tipping kerfuffle which is almost certain to ensue!

Having never been to Central America, I had no particular expectations for Nicaragua. Truly, the people we encountered (with the occasional exception) were among the most friendly we have ever met. Lounging in the central square in Granada, we were chatted up by one of the local constables from the National Police.

He smiled and corrected our butchering of the Spanish language and proudly showed us pictures of his children. Children wove between the legs of strangers, chasing one another with their toys and giggling all the while. When play time was finished, it was on to helping Mom setup the food cart for some of the youth.

While enjoying a late dinner at a popular corner restaurant, we noticed droves of well dressed men and women pouring out of cars, all dressed in yellow. Shortly after the onslaught of sunshine-inspired-style had invaded the street corner, the guest of honor arrived – a young woman celebrating her birthday. Everywhere we looked, families were gathered around one another, whether there was a special event or not.

Food here was fresh and flavorful. The food carts and stands churn out high quality goodies like chicharrones and hand-made tortillas.

One of our favorite snacks was a rather simple dish known as tostones, nothing more than fried plantains. When done right, they offered a pillowy texture with a very light banana-meets-potato flavor – like a potato and a plantain made love and threw their offspring into a deep fryer. Devilishly delicious. Although we encountered innumerable pigs and piglets wandering the streets and beaches, we sadly found no pork to eat minus the glutenous amount of chicharonnes we devoured. They go down so well with Ron y Coca. Fleur de Cana has changed my wife’s mind when it comes to rum. Super smooth and nearly tasteless (the silver stuff), it was WAY too easy to finish your third and realize, “yup, I’m drunk”. Fear not, for the hearty breakfasts are marked by eggs, fried cheese, starches and coffee. What hangover? Most meals outside of breakfast featured seafood and fried potatoes of some kind. Oh yes, let me not forget to mention the accompaniment to every meal, lots of rice and beans. Oddly enough, we still can’t enough.

One of our favorite evenings began with drunk uncle “helping” us find the building for our cooking class – rather, he accompanied us on the route which we already knew – shortly after the sun set. He demanded a tip. I laughed. The proprietor of the cooking class showed him the door. We quickly forgot about the strange experience and sipped on our Sangria while relishing that we had an entire kitchen to ourselves. It was just the instructor, her helper and a translator. Deciphering the meaning of words through hand gestures and a little common sense was still necessary, if not an enhancement. After we drank enough red stuff to feel nice and warm inside, we learned generations-old recipes from a native. We broke bread, err rice, and sipped on cool beverages while sharing stories over Indio Viejo, a chicken stew with a base of fried corn flour. There is something about preparing food with complete strangers and then enjoying a meal together that is quite humbling and unifying all at once.

Crammed into a converted short bus, flying down a dark road, the anticipation was hardly tolerable. Like moths waiting for the flame to ignite, we couldn’t wait to reach the top of Mombacho. One of several active volcanoes in Nicaragua, Mombacho offers a rare opportunity to hang your head out over the putrid smelling but terribly exciting lava-filled crater. We were only afforded a few minutes at the crater’s edge due to the toxic air quality so we relished every second of this childhood dream to see a real volcano.

My third grade self would be quite proud to know that I finally graduated from the baking soda and white vinegar paper mache science project. I ALMOST won the blue ribbon at the science fair.

Crashing waves on sandy beaches and a gentle breeze greeted us in Playa Gigante, just Southwest of Granada, for our final days in this beautiful landscape. I had dreams, inspired by my time with a close friend in San Diego, of surfing the Pacific Ocean on the coast of Nicaragua, but laying on the beach and playing in the waves proved eventful enough. 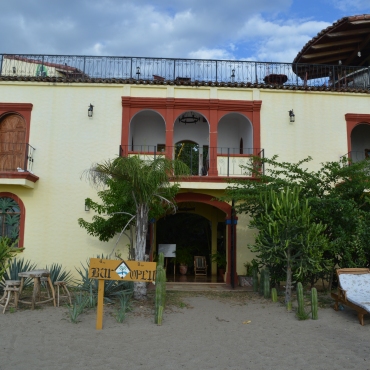 We celebrated New Year’s Eve in this sleepy fishing village of a few hundred, doing our best to avoid the war-zone of fireworks which began at 6pm and continued well into the earliest hours of 2017. New Year’s Day is a National Holiday in Nicaragua and brought thousands of locals to the beach; opening the curtains to our beach front property revealed a beach nearly packed. 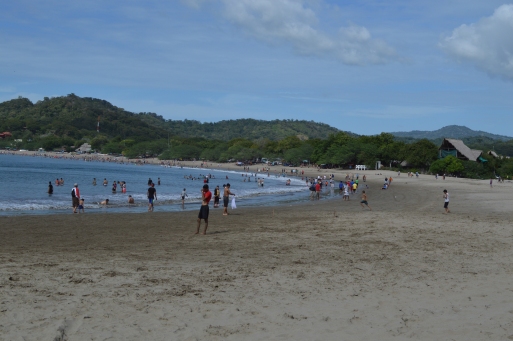 A jaunt through the jungle landed us at a private beach, along with a HUGE spider on my pack to boot; my wife’s sheer look of terror tipped me off that something was about to eat my face, when I realized it was on my shoulder strap. Once the arachnid had dismounted, I couldn’t resist the photo opp – my wife bewildered that I was interested to get a closer look at this thing that was sure to have nearly killed me a moment ago.

I suppose that’s one of the great thrills of travel: what others find to be scary, disgusting or a no-go can become the most memorable and empowering experiences.