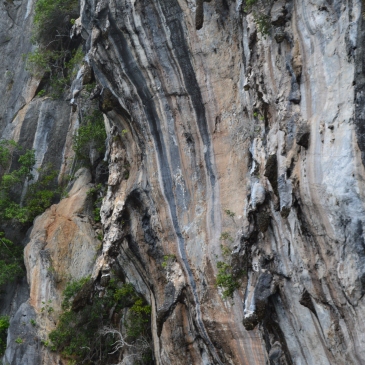 We departed the protected cove of our resort on Miniloc Island, each paddling our own kayaks. As we made our way out of the cove, we caught a glimpse of “Hiwa”, the resident three-flippered Hawksbill Sea Turtle.

Making quick time, we rounded two massive limestone cliffsides jutting out over the Philippine Sea to find throngs of tourists all hoping to catch a glimpse of the “Big Lagoon” on Miniloc. As the tides were quite low, most people were walking into the lagoon through the knee-high, crystal clear waters. Continuing forward we were greeted by an empty lagoon; the absence of boats and people milling about brought forward the sounds of the rainforest – teeming with birds and a rather mysterious jostling of tree branches. Just as Tarin started to say how badly she wanted to see the indigenous Long-Tailed Macaque monkey, I spotted one fishing at the edge of a limestone rock not more than a stones throw. We slowed our kayaks to get a better view when we realized that the tree branches moving about were Mr. Macaque’s buddies, munching on ripe fruits aplenty. The longer we observed, the greater the number we saw. Mom’s carrying their little ones, adolescents playing with one another and a watchful male (I am sure you can imagine how we decided we was a male) keeping eyes on us at all times. We estimated that this group was 20 strong. They never appeared too concerned about us floating along, all the while ooing and ahhing at a sight we had never witnessed.

We kept our distance so as not to disrupt their afternoon foraging but not without shooting some video. No recorded media can do this experience justice but we hope some of the serenity and beauty of this place is palpable.